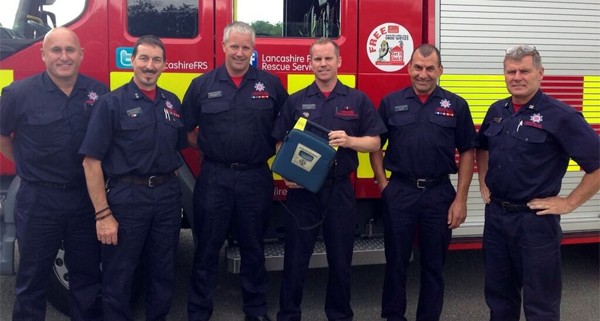 IS Trainer Ian- puts his experience of Emergency First Aid into action, and saves a man’s life after he suffered a heart attack at the wheel.

Leyland firefighters who saved a man’s life after he suffered a heart attack at the wheel have been congratulated for their efforts.

As reported in last week’s Guardian, crews were called to an incident at the Morrisons petrol station in Olympian Way, Leyland, after an 82-year-old caused a three-car accident.

Now, after being recognised for their fast-thinking approach during the emergency by Lancashire’s Deputy Chief Fire Officer, Justin Johnston, on Twitter last week, Leyland watch manager Ian Hainsworth has told the Guardian what happened on the day.

He said: “We were called to the petrol station because people initially thought there was a fire.

“The man had suffered a cardiac arrest as he pulled into the petrol station and he put his foot on the accelerator, which meant his wheels were scoring and generating a lot of smoke.

“We thought we were going to a blaze, but then we saw the man on the floor.

“People were trying to talk to him and they told me they thought he was still breathing, but when I checked, he wasn’t.

“I did CPR straight away and we got the defibrillator out of the fire engine and used that.

“We managed to bring him round and then the paramedic arrived.

“We gave him the best possible chance we could.”

The man from Balcarres Road, is still in hospital after the incident.

It happened at around noon on Thursday, August 29, and his Vauxhall Vectra collided with the back of a Citroen Dispatch van, as the driver was filling up at the petrol station, narrowly missing injury.

That was pushed forward and collided with a Citroen Picasso. Nobody else was hurt in the incident.